The first airing of this Super Bowl ad triggered a 24-hour cause marketing event where Bank of America agreed to donate $1 to (RED) for each iTunes download of U2’s song Invisible — a classic example of “You Engage. We’ll Give.”

[In support of (RED), for the next 24 hours, U2 Invisible (is) Free (to download) on iTunes. For Every Download, Bank of America donates $1 to (RED). Download Now. It’s Time to Begin the End of AIDS.]

In the week prior to the 2014 Super Bowl, Bank of America used paid, owned, and earned media to tease a free 24-hour download event.

The countdown to the event was teased on 15 Bank of America and (RED) sites and mobile properties, as well as on iTunes itself.  The countdown was also featured on a digital billboard in Times Square that could be seen in the background of Super Bowl pre-game TV coverage on Fox.

To further capture attention, the U2 song was teased on radio and a promoted Vine on Twitter.

The #Connect4Red ad ran at the end of the Super Bowl’s first quarter, followed by 13 more airings during post-game commentary and the next morning’s “best commercial” segments on news and talk shows. 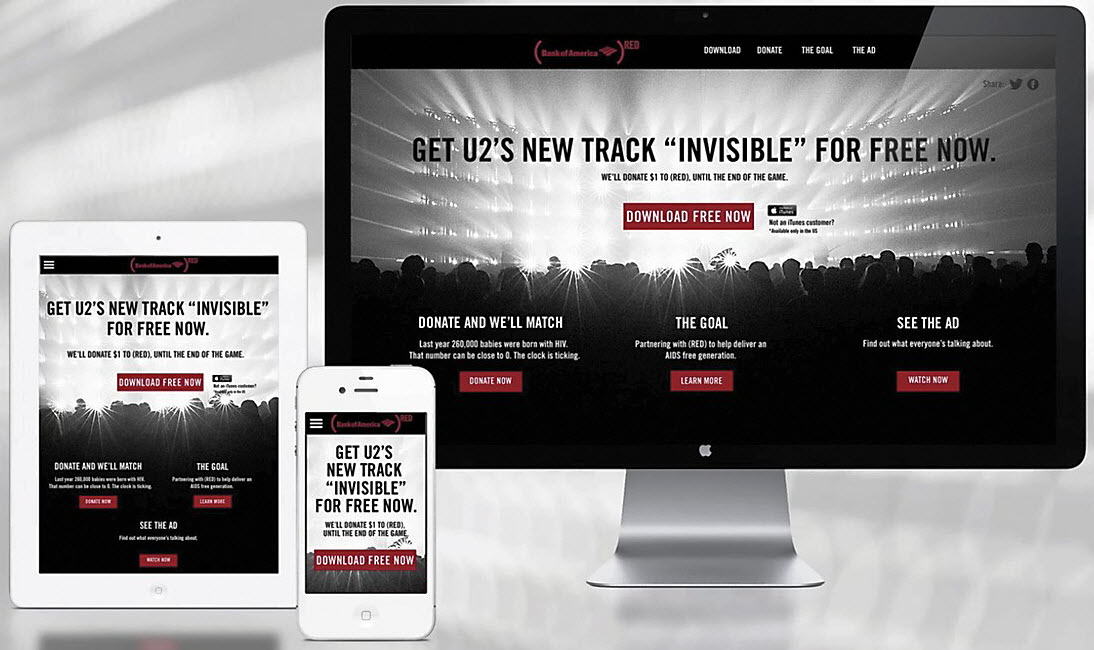 3,144,477 downloads of Invisible in 24 hours generated a $3,144,477 donation from Bank of America — which yielded over 7.8 million days of life-saving AIDS medication for pregnant mothers. From a goodwill perspective, Bank of America achieved its most consecutive days of positive brand sentiment since 2008, with its donation promoted via a Super Bowl commercial, 7 million YouTube views, 112,000 campaign mentions and 107,000 tweets.

For more information, review the full write-up of the Bank of America #Connect4Red Case Study.