Among Hispanics, State Farm’s “Play Today Illuminate Tomorrow” sOccket Ball campaign contributed to 44% growth in quotes and to a 47% increase in sales throughout a five month period.

[In Latin America, more than 30 million people live without electricity. But even after dark, the joy of soccer continues in every street and every heart.]

This is the story of how a ball, Latino passion, and an insurance company came together to better communities.

Let’s start with the ball. A brilliant invention called sOccket. This ball converts passion and play into light by transforming every bouncer motion into stored energy that can later power a lamp. Just 15 minutes of play generates three hours of light. Neat, huh?

This innovative soccer ball was a great opportunity to combine the legendary soccer fanaticism of Hispanics with their desire to give back to their communities in one compelling program, resulting in Juega Hoy, Illumina de Manana: “Play Today, Illuminate Tomorrow.” A program designed to engage consumers and bring a light of hope to children of communities in need throughout Latin America. The goal, to generate virtual minutes of light which would then translate into thousands of sOccket ball donations to participating countries of the 2011 Gold Cup FIFA Tournament.

The more virtual minutes, the more sOccket balls. Simple. To facilitate that we created a social media platform where US football (i.e., soccer) aficionados could participate, pass the ball, and be good neighbors.

More than 142,000 minutes were generated surpassing original goals in just four days. These minutes were generated through State Farm’s Latino Facebook page where participants could add minutes by playing interactive games with the sOccket ball, watch their favorite free-styler videos, one like, one more minute, and download a virtual reality mobile app that generated virtual minutes too.

At the Gold Cup games, more than 18,000 people played for the cause. The more engagement the more minutes. It was all added-up and tracked back to the counter on State Farm’s Latino page where they could also see the ranking of their favorite country. This live event generated a 23% response rate (qualified leads). We increased our likes by 9% on the State Farm Latino Facebook page and 38% of that was organic growth. As a result, people participated to make a difference for their country of choice.

Thanks to them and State Farm, hundreds of Latin American communities in Mexico, Costa Rica, and El Salvador with bare access to electricity are now seeing a light of hope. They received the most minutes during the program and thus received thousands of sOccket balls.

The Juega Illumina Program contributed to a 44% growth of Hispanic quotes and a 47% increase in sales throughout a five month period.

You can imagine these children kicking that ball to a brighter future. It’s what State Farm does best: taking people to a better state of being.

A sOccket ball is a soccer ball that stores kinetic energy inside for later use as a small electric generator.

Participants could play with sOccket balls at Gold Cup events, and virtually, on: State Farm Latino Facebook, interactive online banners, and via an iPhone mobile app. 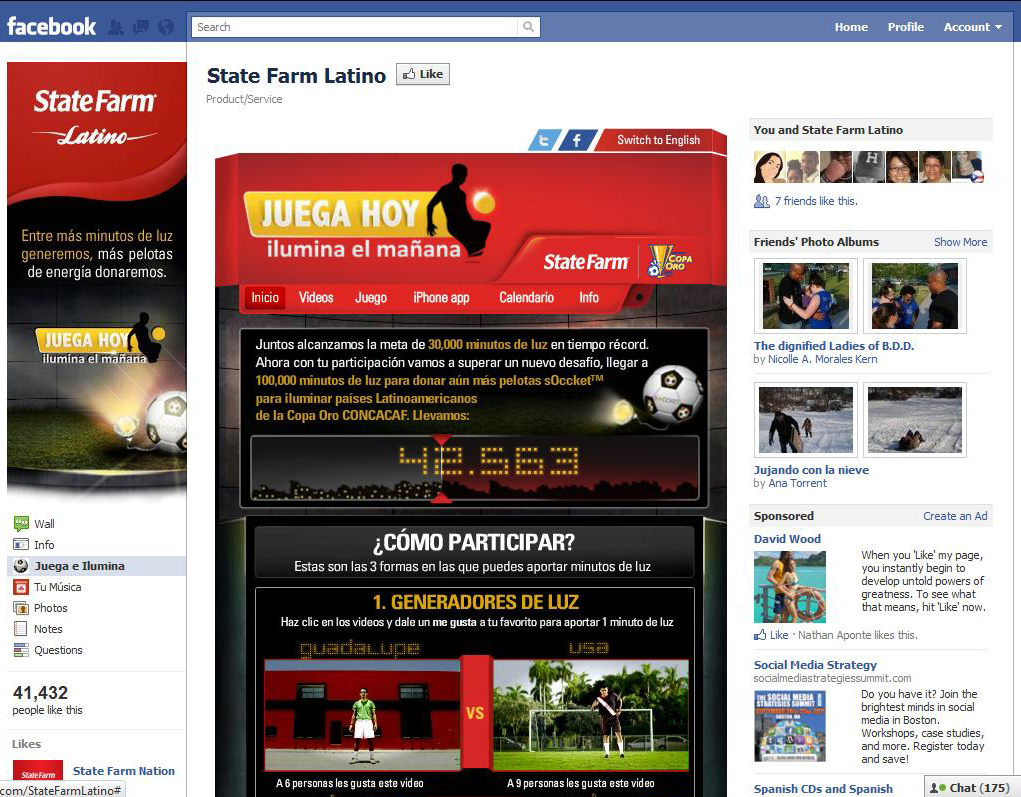 For each minute of play, participants accrued points — “virtual minutes of light” — toward providing soccer balls to Latin American communities without electricity. There, local children play soccer with the donated sOccket balls, which have a unique feature: Every 15-30 minutes of play generates three hours of power (a fully charged ball) when a light is plugged into a socket embedded in the ball. Mobile phones can also be charged by the ball.