Air pollution kills nearly seven million people a year globally, including ten thousand just in London. But because it is scientifically complicated and largely invisible, most people don’t realize just how serious the issue is.

So Plume Labs, an environmental technology company, set out on a mission to save city dwellers from air pollution by making it impossible to ignore.

Introducing the Pigeon Air Patrol, the world’s first flock of pigeons who fly around London monitoring air quality, in real time on Twitter. Ten pigeons were fitted with custom made back packs that measure nitrogen dioxide, ozone and volatile compounds.

Each day, in rush hour, when air pollution is at its most deadly, the pigeons were released from various locations around London. Going where no bike, car or drone can go, they flew across the city, quickly gathering pollution data.

Anyone twitting their location @pigeonair got an instant update on air pollution in their area from the pigeons.

[LONDON IS OFTEN 11 TIMES OVER THE EU POLLUTION LIMIT. That’s too many. 11 times too many]

With a touch of wit, the Air Patrol brought alive the health risks associated with poor air quality, and encouraged people to protect themselves with practical advice from the Plume Air Mobile App. Not bad for a pigeon.

93% of those engaged told us they felt differently about pollution now.

And we even managed to crowd fund new Plume Lab Sensors which a hundred Londoners will beta test in their everyday lives.  Data, feathers, and tech innovation: The Pigeon Air Patrol. 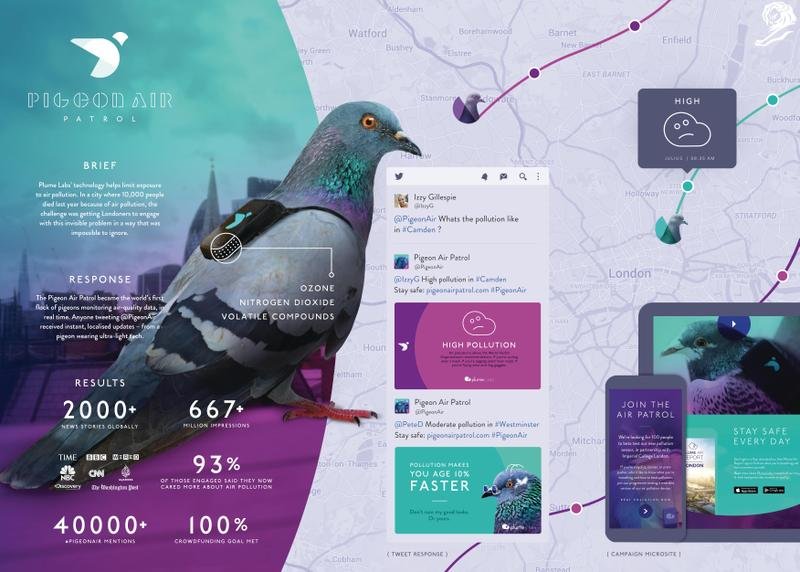