Pantene’s ‘Labels Against Women’ ad exposes a gender bias double-standard:  Men and women are shown exhibiting the same behaviors but are labeled differently.

Pepe Torres, P&G Philippines – Country Marketing Manager, Haircare:  “Pantene has been struggling to maintain its emotional relevance with target consumers for the past few years. So, with this experimental campaign, we set out to start a conversation that would truly resonate with her.”

Francine Gonzales, BBDO Guerrero, Managing Director:  “We had conducted research that stated that 70% of men actually think that women need to downplay their personality to be accepted. Even more surprising was that 58% of women agree to this fact. This then became the foundation of the campaign to highlight the gender biases and double standards that still exist today.”

Charibelle Morados, P&G Philippines – Country Media Manager:  “It is the combination of a very strong creative asset, and a robust plan that led to the Pantene campaign to generate or deliver the best ever in terms of number of views, and even the full view rate across any P&G ad that we’ve had. The video itself garnered 31 million impressions, but the big ops across October through December from all the press and global media sites, we actually reached almost 200 million impressions. The affinity targets that we used for the Google display network improved performance of the views, and the actual view-through rate for the ad. On November 17th, our views really surged because that’s when we started promoting on YouTube via TrueView placements. That was an average of about 50,000 views daily. By the first week of December, we were hitting 90,000 daily views already. With all the online sharing that was happening, it actually hit viewable influencers like Sheryl Sandburg. That’s when she shared the video, and we landed 100,000 views daily. Today, we’re already at 46 million views.

Pepe Torres:  “If we had launched this in the Philippines 10 years ago, it would’ve stayed in the Philippines. But because we used YouTube, our message became a global message, and it went far beyond our expectations.” 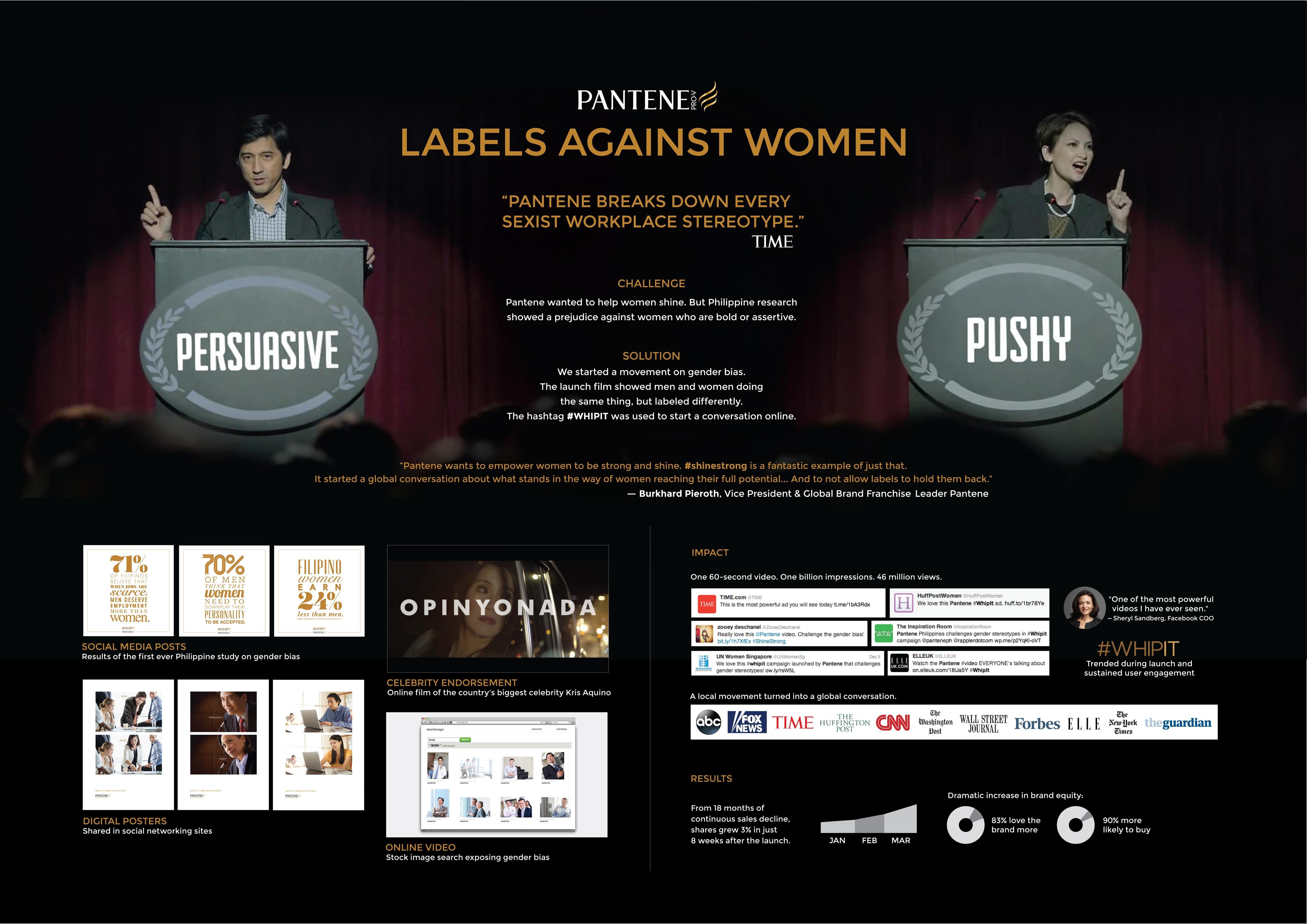 Pantene sales had declined for the 18 months preceding the launch of the Labels Against Women digital ad.  By 8 weeks after launch, Pantene’s value shares grew by 3%.

Pantene’s Labels Against Women commercial ends with the hashtag #WhipIt.

What started with a digital ad was bolstered by online content and a social media partnership with Rappler (a social news network).

Rappler hosted WHIP IT: a series of stories and conversations aimed to “shine boldly beyond labels and stereotypes” and to “highlight that prejudice is not a one-sided thing. It’s not man vs. woman. It’s us vs. gender bias.”

That was followed by webisodes featuring high-profile women talking about gender bias, as well as a new set of videos featuring female celebrities coming forward to face the labels against them.

Facebook COO/author Sheryl Sandberg called the Pantene digital ad: “One of the most powerful videos I have ever seen.” 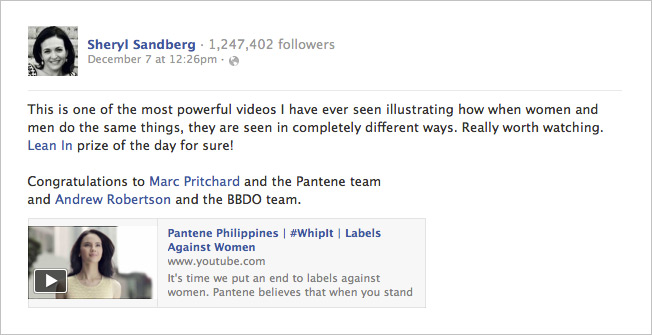 Over 500 news outlets and blogs featured Pantene’s Labels Against Women campaign, yielding one billion impressions worth $US 25 million in media value.