Eye care provider OPSM created Penny the Pirate. Available as a book and an app, Penny the Pirate is the first medical tool that helps Mom’s test their children’s vision as they read them a bedtime story.  Kids are getting an eye test without even realizing it.

Scare tactics are often used in child’s health campaigns. We wanted to take a different approach.

Children don’t like visiting scary optometrists. And bringing them in wasn’t a priority for parents, which is why 1 in 6 children have a vision problem and for over half, it’s undetected.

So eye care provider OPSM created Penny the Pirate. Available as a book and an app, Penny is the first medical tool that helps Mom’s test their children’s vision as they read them a bedtime story.

Because there wasn’t a standard eye screening process for children, we had to start from scratch. So we brought the University of Melbourne together with children’s illustrator and author Kevin Waldren to turn eye tests into a story that would be engaging for children.

Penny the Pirate follows the journey of a young girl as she tries to become the captain of the Mighty Pickle. She has to plunder treasure, read the captain’s log, and spot sails in the distance to prove she’s a worthy leader of this brutish bunch of pirates.

This story helped parents get a better understanding of their child’s eye health. And when they checked their child’s results online, if needed they could book an OPSM eye test immediately.

Penny was launched with TV and across 200 stores. But the most effective channel has been Moms themselves. Using our ‘Pass It On’ program, we encourage them to share the book with others so one book helps many.

Penny the Pirate has also become an invaluable tool for OPSM’s charity OneSight, helping them test more eyes than ever. Because it’s more efficient, accurate, and engaging than previous methods.

Penny’s on track to give 300,000 children an eye test, which has already seen a 188% increase in kids’ eyewear sales since launch. We’ve reach #1 health app in the app store. And by creating Penny the Pirate, OPSM has created a new standard in the screening of children’s eyes. But most importantly, kids are getting an eye test without even realizing it. 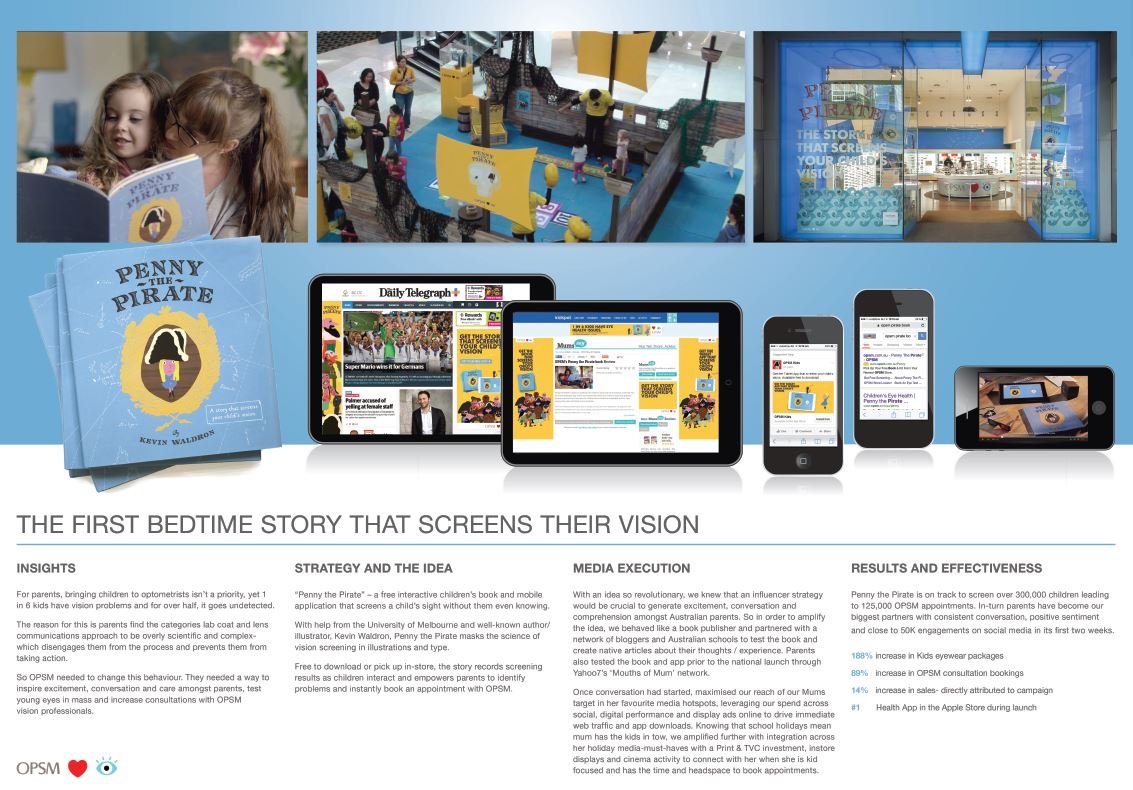 OPSM Website: Get Your Free Copy of Penny the Pirate