Women make up half the population. Yet only 7% of patents are held by them and that’s a ridiculous waste of potential. To call attention to this problem, Microsoft started asking questions.

[Can you name any inventors?]

[Can you name any women inventors?]

School girls: “Hmmm. No. That’s kind of a tough one. In school, it was always a male inventor. I just realized that.”

We realized girls needed more role models, so we gave them some.

[Not everything is “man” made. Tabitha Babbitt made the circular saw. Patricia Bath made laser cataract surgery. Ada Lovelace made the first computer algorithm. Maria Pereira made heart surgery adhesive. Bertha Benz made brake pads. Yvonne Brill made satellite propulsion. Let’s celebrate all things WOMAN MADE.]

School girls:  “Oh my god, there’s so much. I didn’t even know that stuff. You’re surprised because they only talk about Einstein and Benjamin.”

[LAUNCHED IN 90 COUNTRIES AND 30 LANGUAGES]

And so did the world. Within a month, we received over 184 million media impressions and brand sentiment hit an unprecedented 83% as the search for women inventors more than tripled.

We didn’t just stop at the discussion. We encouraged girls to make what’s next with our new patent program. This first of its kind program for young female inventors provides the guidance and funding to file a patent. We kicked it off by asking girls everywhere to share their incredible ideas.

Female student inventor: “For our future prototype, we would like to create a devise that looks like this.”

Then we connected them with tech role models at South by Southwest (SXSW) to help make their ideas a reality, so that Microsoft can help unleash the inventive power of women and inspire girls everywhere.

School girl:  “It gives me motivation that I can invent something, make maybe like a change in the world, and that would be really cool.”

#MakeWhatsNext videos and content have received over 14 million views, earning over 754,000 shares with a positive sentiment of 99.8%. #MakeWhatsNext has also earned over 184 million media impressions.

The campaign drove a 50% increase in website engagement and resulted in a 23% lift in searches for “Microsoft”.

#MakeWhatsNext delivered a 28 point delta increase on brand attributes such as “Microsoft is a brand I love.” 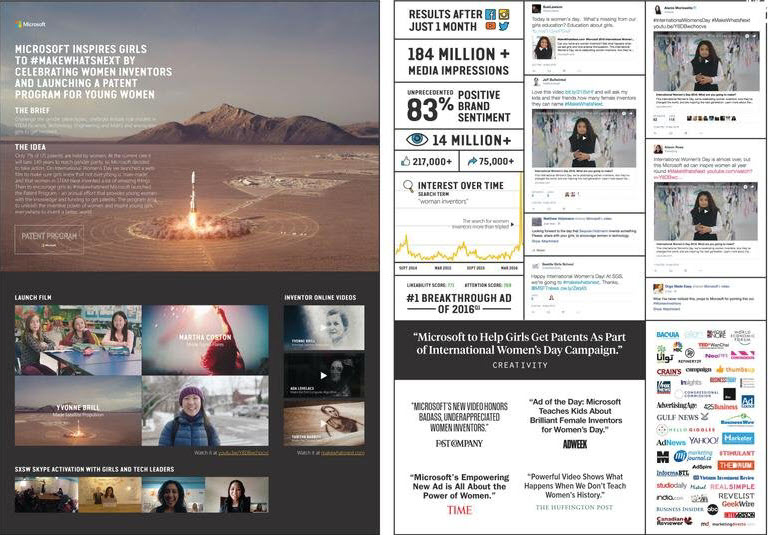 The #MakeWhatsNext campaign is part of the Microsoft Philanthropies YouthSpark initiative, including the MakeWhatsNext.com website:

Microsoft also sponsors DigiGirlz and the Patent Program — an annual commitment from Microsoft to provide girls with a team of experts to help apply for a patent.