Narrator:  “Drive-in theaters are an American tradition, but at the end of 2013, they faced a big problem. The majority would have to shutdown forever with the movie industry’s switch from film to digital projection.”

Daryl Smith, Drive-In Owner:  “It’s a sizeable amount of money, and I’m a little guy. I just don’t have that handy.”

Narrator:  “So this summer, Honda launched Project Drive-In, a movement with a simple goal: keep as many drive-ins alive as possible — and preserve the tradition. Most people didn’t know about the problem, so we created a mini documentary to raise awareness.  We launched the campaign with a contest where five winning drive-ins would receive a digital projector, determined by public vote. We sent the drive-ins a toolkit to campaign for themselves and mobilize their communities, and, man, did they get involved.

Drive-In Owners:  “Vote. Everybody needs to vote. If you love our drive-in, vote for us.”  “You can start voting to keep Mahoning Drive-In up and running.”

Narrator:  We set-up a fund, to keep more drive-ins alive, hosted the first Twitter Vine auction with film critic Leonard Maltin, and held pop-up drive-ins at Honda dealerships to get even more contributions. Within a few weeks we sparked a national conversation.”

NBC Nightly News:  “Tonight, NBC’s Randy McIlwain on how technology threatens to phase out one of our cultural icons.”

News Reporters: “Honda’s trying to shine a light on the plight of American drive-ins with a new online contest.”  “The owners and the community are rallying around this cause to help keep this piece of history up and running.”

Narrator:  “Celebrities tweeted and made videos about it. Local communities did everything they could to help.”

Drive-In Owner:  “He swears he won’t come down until we get a digital projector.”

Narrator:  “Drive-in fans across the country cast over 2.6 million votes and all this passion inspired people, and even other brands, to contribute to the cause.”

In 2013, Honda became the first Japanese automaker to be a net exporter from the United States. Yet many Americans still associate ‘American Honda’ as being a Japanese company.

Through Project Drive-In, Honda leveraged an under-served cause to associate itself with a nostalgic part of America’s car culture.

Honda branding is prominently embedded within the Project Drive-In logo:

Calls-to-action included branded asks, such as the title of this campaign video: “Project Drive-In: Help Honda Save an American Icon”

Visitors to ProjectDriveIn.com could vote for their local drive-in theater to receive one of five Honda-donated digital projectors, share the story via Facebook and Twitter, pledge to visit a drive-in, and contribute to the ‘Save the Drive-in’ crowdfund on Indiegogo. 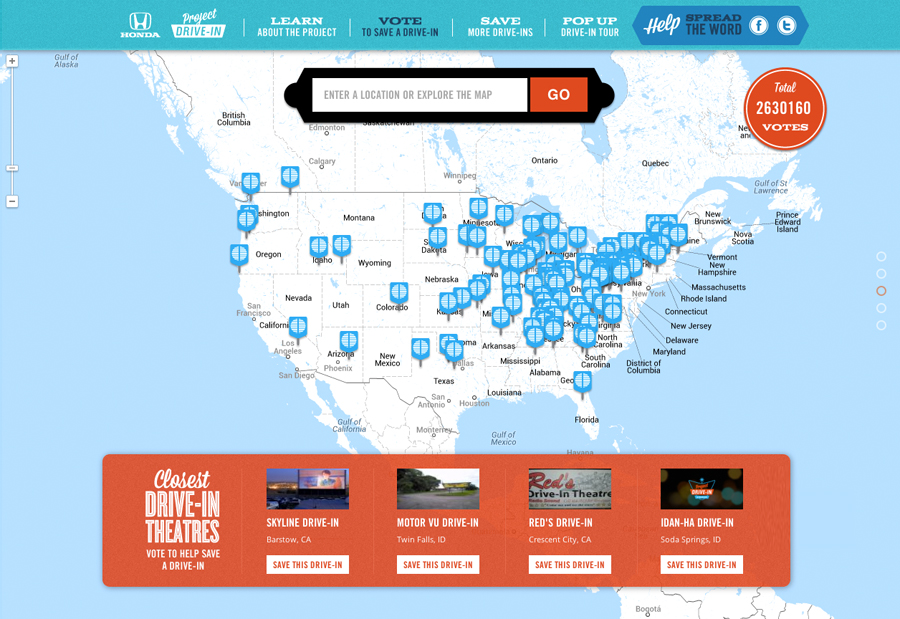 Honda gave drive-in theater owners customized posters, flyers, PR how-tos, and digital badges to campaign for votes. “Over 126” drive-in owners participated by writing an essay as well as creating a video and/or photo gallery, asking America to vote for their drive-in. 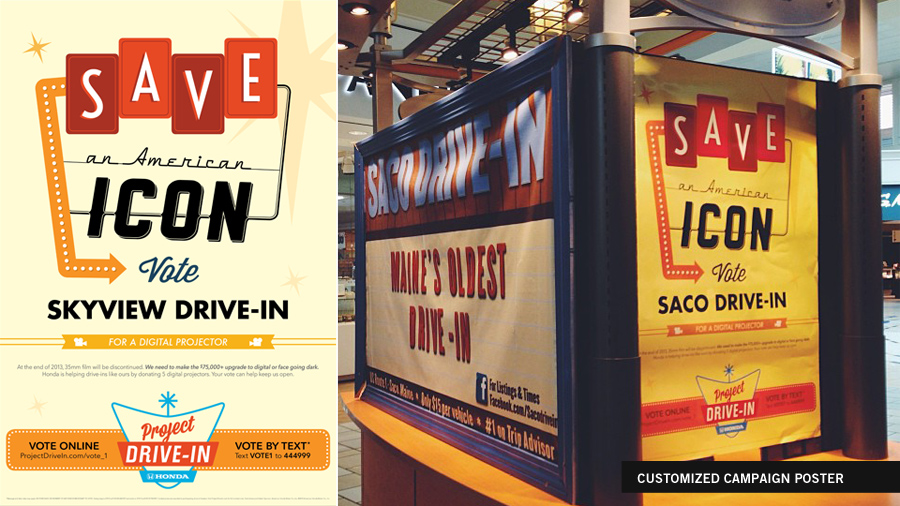 Incentivized by the opportunity to be awarded an $80,000 digital projector, drive-in owners used their theaters and Facebook pages to rally their communities to support their local drive-in theater. After 45 days of campaigning, more than 2.6 million votes were cast on Honda’s ProjectDriveIn.com microsite. 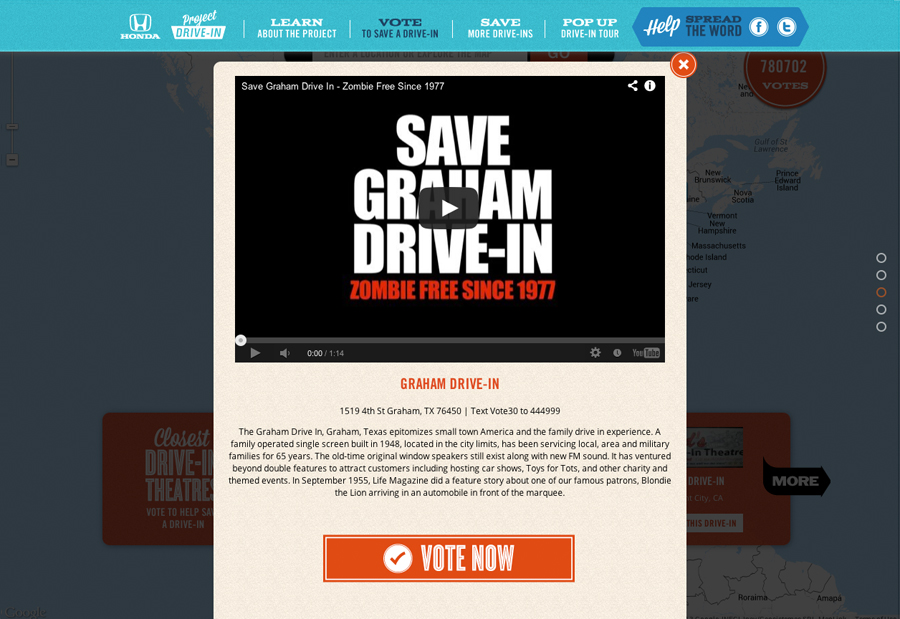 Honda published a consumer-oriented results video, one month into the campaign. The mini-documentary featured grateful award recipients and then urged viewers to donate to save some of the remaining 140 drive-in theaters.